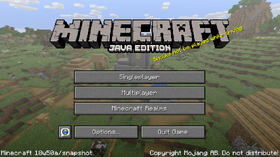 18w50a is the twelfth snapshot for Java Edition 1.14, released on December 12, 2018, the last snapshot of the year.[1] It adds a new type of cat, a villager profession, a new statistic, functionality to barrels, blast furnaces, smokers, giants and more.

36 issues fixed
From released versions before 1.14