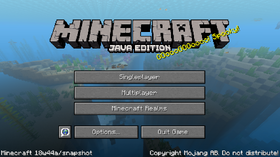 18w44a is the fourth snapshot for Java Edition 1.14,[1] which adds 10 new blocks and stray cats as their own separate mob.

21 issues fixed
From released versions before 1.14