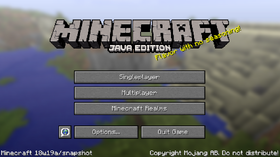 18w19a[1] is the thirty-third snapshot released for Java Edition 1.13, which added the Dolphin's Grace effect and changed some IDs, mainly to biomes.

Heart of the sea

99 issues fixed
From released versions before 1.13