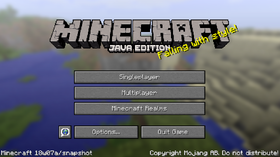 18w07a[1] is the eighteenth snapshot released for Java Edition 1.13. It is the first snapshot to include the Update Aquatic features, although the decision to include them in 1.13 happened two weeks prior. This snapshot contains more gameplay additions than the previous snapshots for 1.13, which mostly added or modified commands.

12 issues fixed
From released versions before 1.13