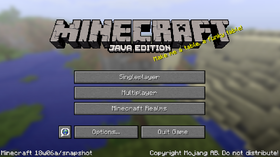 18w06a[1] is the seventeenth snapshot released for Java Edition 1.13, which mostly added two new air variants, added new biomes for the End, re-added /enchant, added a furnace recipe book, and removed the Customized world type, as well as the rewrite of the world generation system as a result.

27 issues fixed
From released versions before 1.13