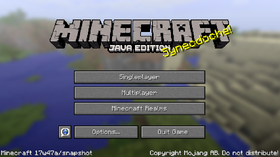 17w47a[1] is the sixth snapshot released for Java Edition 1.13, which added a new type of pumpkin, debug sticks, an item form of many blocks which previously could only be placed using commands, tweaked the placement conditions for many blocks, performed The Flattening, and much more.

80 issues fixed
From released versions before 1.13