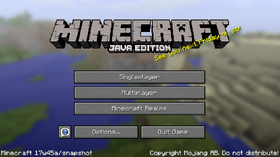 17w45a[1] is the third snapshot released for Java Edition 1.13, which completely overhauled the command system.

38 issues fixed
From released versions before 1.13