Edit
watch 28:07
Minecraft Interactive Experience
Do you like this video?
Play Sound
This article documents an April Fools' joke.
There is no actual "Love and Hugs Update" of Minecraft in development.
15w14a 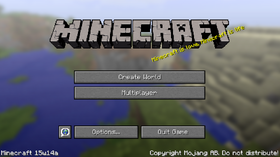 15w14a[2] is an April Fools' joke released on April 1, 2015. It was released as a hoax announcement for 1.10, which Mojang named The Love and Hugs Update (unrelated to the actually released update and the update released with the same version number, the Frostburn Update). No further snapshots were released for the hoax update. This version is a fork of 1.8.3.

Carrot on a Stick

Some changes were on the official changelog, but were not included in the actual version. Those are: