Edit
watch 28:07
Minecraft Interactive Experience
Do you like this video?
Play Sound
14w26c 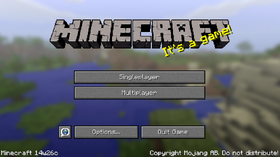 14w26c is the thirty-first snapshot for Java Edition 1.8, and was released to fix some bugs and a major world-save corrupting problem in the 14w26a and 14w26b snapshots.

It is strongly advised not to use a world that had been last saved with 14w26a or 14w26b. To avoid problems use a world backup that was saved with a pre-14w26 version.[1]

21 issues fixed
From released versions before 1.8