Edit
watch 28:07
Minecraft Interactive Experience
Do you like this video?
Play Sound
14w26b 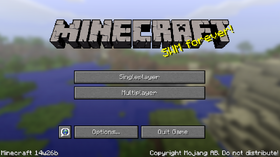 14w26b is the thirtieth snapshot for Java Edition 1.8, and was released to fix a bug pertaining to the lack of chunk rendering in Multiplayer introduced in 14w26a.[1]

It is strongly advised to make a backup of a world before using this snapshot, because of block-corrupting problems that were not corrected until 14w26c.[1]

4 issues fixed
From the 1.8 development versions