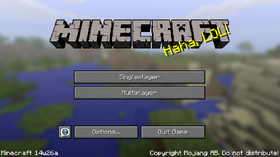 14w26a is the twenty-ninth snapshot released for 1.8. This snapshot is the first after a decision to release snapshots on Wednesdays rather than on Thursdays.[1]

It is strongly advised to make a backup of a world before using this snapshot, because of block-corrupting problems that were not corrected until 14w26c.[1]

47 issues fixed
From released versions before 1.8