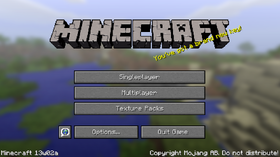 An experimental version of 13w02a was released by Dinnerbone on Mojira to try to fix an issue with white textures.[2]

22 issues fixed
From released versions before 1.5

From the 1.5 development versions