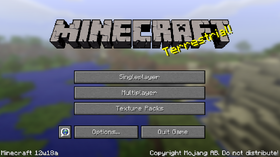 This snapshot is known for being the version to make singleplayer worlds run on a local server, resulting in the use of separate threads for rendering logic and world logic. This change resulted in a large number of broken features, several of which are yet to be fixed in the latest version, and on weak computeres can result in server-lag in singleplayer.

Features broken by the internal server