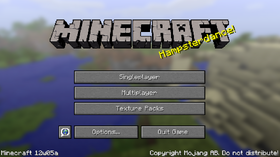 12w05a was reuploaded later on February 2, 2012, to fix a bug where the game would crash when right-clicking a sitting cat empty-handed, as well as fixing racist translation griefings.[2]