Edit
watch 28:07
Minecraft Interactive Experience
Do you like this video?
Play Sound
Minecraft 1.7.5 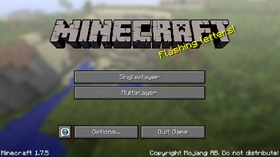 4 issues fixed
From released versions before 1.7.2

From the 1.7.x release versions

This section documents an unreleased version.
While there is proof of this version's existence, it was never released to the public.

1.7.5-wip was a development testing version for Java Edition 1.7.5, shown in a YouTube video on February 18, 2014.[3] This version tested adding minigames to Realms and allowing admins to switch between normal worlds and temporary minigame worlds.