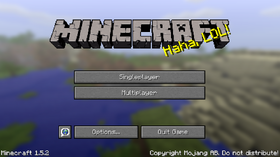 1.5.2[1] was a minor update for Java Edition, released on May 2, 2013,[2] to fix some of the bugs and crashes in 1.5 and 1.5.1. This is the last official Minecraft version that will run on PowerPC Mac computers and Java 5, and the last version to be playable with no download required.

24 issues fixed
From released versions before 1.5

The version file located in the .minecraft folder shows that a reupload may have been posted and reverted at some point.