Edit
watch 28:07
Minecraft Interactive Experience
Do you like this video?
Play Sound
Minecraft 1.4.6 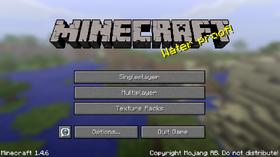 1.4.6[1] is an update to Minecraft (Java Edition) that was released on December 20, 2012.[2] It introduced fireworks, enchanted books and the Thorns enchantment. It also added a warning for users playing on soon-to-be unsupported systems (PowerPC and Java 5). While it was not the last update to 1.4, it was the last one before the snapshots of 1.5 started.