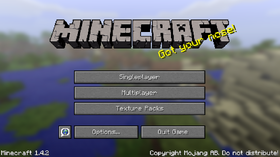 1.4.2, the first release of the Pretty Scary Update, is a major update to Minecraft (Java Edition) released on October 25, 2012,[1] which added a number of new mobs (witches, bats, zombie villagers, wither skeletons), wearable and placeable heads, a new boss (the wither), the command block, the anvil, the beacon, new food (potatoes, carrots and pumpkin pies), carrots on sticks for controlling pigs and new decoration items (such as item frames, flower pots and cobblestone walls).