Edit
watch 28:07
Minecraft Interactive Experience
Do you like this video?
Play Sound
For a guide about all content in this release and the other releases of 1.3, see Java Edition guides/1.3 releases.
Minecraft 1.3.1 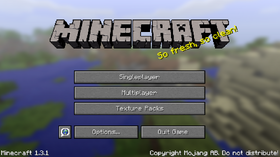 1.3.1 is a major update to Java Edition released on August 1, 2012,[1] which added trading, adventure mode, new generated structures (jungle and desert pyramids) and new blocks/items including emeralds, book and quills, written books, and tripwire. Initially Mojang were going to add rubies but they replaced those with emeralds. They also added ender chests, and also improved enchanting and split the Creative inventory into separate sections. While it was not the only 1.3 release, it was the only one before the snapshots of 1.4.2 started.