Edit
For a guide about all content in this release and the other releases of 1.2, see Java Edition guides/1.2 releases.
Minecraft 1.2.1 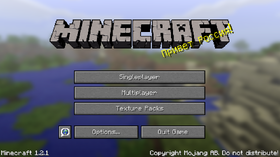 Similar to Java Edition 1.1, an official video documenting some of the 1.2's major features was released on Mojang's official YouTube channel on March 1, 2012. The video was made by Hat Films, who have made update trailers and videos for Mojang in the past.