View source
For a guide about all content currently released in this update, see Java Edition guides/The Wild Update.
Minecraft 1.19 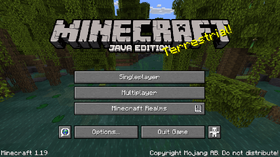 1.19, the first release of The Wild Update, is a major update to Java Edition, released on June 7, 2022.[1][2] The update was first announced on October 16, 2021, during Minecraft Live 2021. It introduces brand-new materials, blocks, and locations, such as the Deep Dark and Mangrove biomes; ancient cities; mobs like the warden, the frog, the tadpole, and the allay, as well as new items obtainable only in these new biomes.

137 issues fixed
From released versions before 1.19