This page documents an unreleased version.
While there is proof of this version's existence, it was never released to the public.
Minecraft 1.18/gameplay-tweaks @ 8f847b11fb2 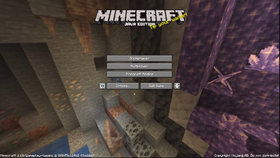 1.18/gameplay-tweaks @ 8f847b11fb2 is an unreleased development version for Java Edition 1.18 experimental snapshot 6, recorded in the morning of September 1, 2021,[1] and uploaded to the Henrik Kniberg's YouTube channel on September 3.

This development version appears to contain all of the changes introduced in experimental snapshot 6.

Video made by Henrik Kniberg: