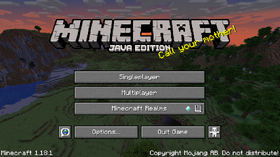 Most importantly, this version fixes a zero-day security vulnerability in the Log4j library that could be used to perform a remote code execution exploit. As a result, players were urged to secure their clients and servers.[2]

While this wasn’t the last update to 1.18, it was the last one before the development versions of 1.19 started.

8 issues fixed
From released versions before 1.18