Edit
watch 28:07
Minecraft Interactive Experience
Do you like this video?
Play Sound
For a guide about all content currently released in this update, see Java Edition guides/Caves & Cliffs.
Minecraft 1.18 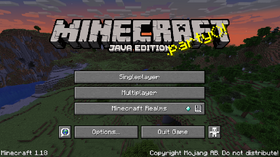 1.18, the first release of Caves & Cliffs: Part II, is a major update to Java Edition released on November 30, 2021.[1] It completely overhauls the Overworld generation, with larger caves, taller mountains, new mountain biomes, new cave biomes, and flooded caves. It was first announced alongside the release of 1.17 snapshot 21w15a when Mojang Studios stated that the Caves & Cliffs update would be split in two.[2][3] Some features for 1.18 were initially implemented during 1.17's development cycle, before getting postponed and relegated to official data packs used with a corresponding 1.17 snapshot.[4]

240 issues fixed
From released versions before 1.18