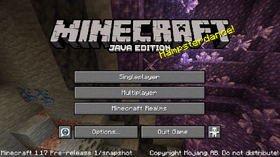 1.17 Pre-release 1 (known as 1.17-pre1 in the launcher) is the first pre-release for Java Edition 1.17, released on May 27, 2021,[1] which re-added candles to survival mode, changed credits and the glowing on signs, added new advancements and splashes, and fixed bugs.

64 issues fixed
From released versions before 1.17