Edit
watch 28:07
Minecraft Interactive Experience
Do you like this video?
Play Sound
For a guide about all content currently released in this update, see Java Edition guides/Caves & Cliffs.
Minecraft 1.17 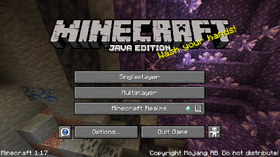 On April 14, 2021, Mojang Studios announced that the update would be split into two updates due to the amount and complexity of content, as well as team health.[3] Multiple features such as revamped mountain and cave generation, the lush caves and dripstone caves biomes, and increased world height were removed in 21w15a, and were subequently released in 1.18.[4] A data pack was included in the Minecraft.net article for 21w15a that re-enabled the removed features, and subsequent snapshots updated this data pack.

335 issues fixed
From released versions before 1.17