Edit
For a guide about all content in this release of the Nether Update, see Java Edition guides/Nether Update.
Minecraft 1.16 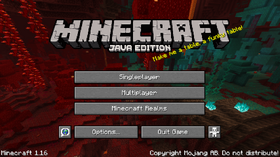 1.16, the first release of the Nether Update, is a major update to Java Edition announced at MINECON Live 2019[1] and released on June 23, 2020.[2] This update overhauls the Nether by adding four new biomes, four new mobs (the piglin, hoglin, zoglin, and strider), and a multitude of new blocks, including many variants of blackstone as well as the respawn anchor used to set the player's spawnpoint in the Nether. It also adds a new netherite tier of equipment, obtained through ancient debris found rarely throughout the Nether.

1.16 was reuploaded around 6 hours after release to fix an issue with the Realms menu which prevented clients from viewing and connecting to Realms (MC-191138). The changes were only to the client, and the server jar files are functionally identical.[3] This hotfix was unsuccessful,[4] and 1.16.1 was released the next day.

463 issues fixed
From released versions before 1.16

Screenshots of the Nether Update from MINECON Live 2019: