Edit
watch 28:07
Minecraft Interactive Experience
Do you like this video?
Play Sound
Minecraft 1.15 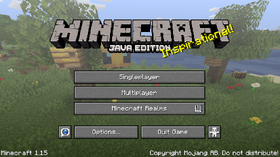 For a guide about all content in this release and the other releases of Buzzy Bees, see Java Edition guides/Buzzy Bees.

1.15, the first release of Buzzy Bees, is a major update to Java Edition released on December 10, 2019.[1] It added bees and bee-related items, such as beehives, honey bottles and honeycombs. Alongside adding bees, this update focused on fixing bugs and improving performance,[2] as well as adding numerous features that were originally Bedrock Edition exclusives.[3]

305 issues fixed
From released versions before 1.15