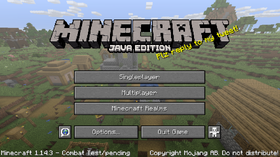 1.14.3 - Combat Test is the first experimental version of a future combat update.[1] Although it is a version for a future major release, this combat experiment is a fork of 1.14.3 Pre-Release 4. This version was released only on Reddit, so it does not appear in the launcher or in any Minecraft.net blog post.

This version is not supported on the bug tracker, and as such issues relating to this version will not be fixed.