Edit
watch 28:07
Minecraft Interactive Experience
Do you like this video?
Play Sound
Not to be confused with Bedrock Edition 1.14.0.
Minecraft 1.14 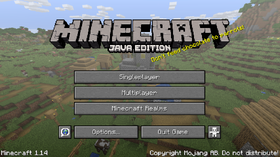 1.14, the first release of Village & Pillage, is a major update to Java Edition released on April 23, 2019.[1] It focuses mainly on villages, adding a new subset of illagers known as pillagers, and redesigns village architecture to match the biome it is located in. This update also introduces many new blocks and mobs, revamps the crafting system by moving some functionalities to different blocks, updates the taiga biome with foxes and sweet berries, and adds a new bamboo jungle biome along with bamboo and pandas. It is also the first major release to include the new textures of the Texture Update.

Originally, 1.14 was to be the version number Update Aquatic would release as, but it was changed to be merged into 1.13, then named Technically Updated, due to the world generation overhaul taking longer than Mojang was hoping.[2]

The update was originally revealed during the MINECON Earth 2018 livestream on September 29, 2018.[3]

Illusioners, players and the wither

226 issues fixed
From released versions before 1.14