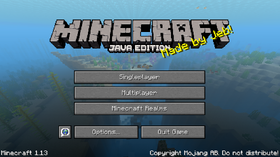 For a guide about all content in this release and the other releases of the Update Aquatic, see Java Edition guides/Update Aquatic.
Not to be confused with Bedrock Edition 1.13.0.

1.13, the first release of the Update Aquatic,[2] is a major update to Java Edition released on July 18, 2018. It focused mainly on ocean content and technical features.[3][4] Specifically, new blocks, such as blue ice, coral, conduits, kelp, sea pickles, stripped logs, wood, and turtle eggs were added, as well as new items such as buried treasure exploration maps, debug sticks, buckets of fish, hearts of the sea, phantom membranes, tridents, and much more. Also, water is more transparent than before and the color was changed to match specific biomes, while it was only dark blue before 1.13. In addition, dolphins, drowned, fish mobs, phantoms, and turtles were added, as well as new biomes, a new buffet world type (a stopgap replacement for the customized world type), and new generated structures. This update also added many commands and changed the format of existing commands, and added many new technical aspects, such as data packs and tags.

This update was originally intended to be released as two separate updates with 1.13, originally named Technically Updated, having the technical changes, and 1.14, originally to be called the Update Aquatic, having all the ocean features, however they were combined into one big update,[1] and as such snapshots from 17w43a to 18w06a mainly just added or modified commands.

Arrow of the Turtle Master

Hearts of the sea

Potion of the turtle master

From released versions before 1.13