Edit
watch 28:07
Minecraft Interactive Experience
Do you like this video?
Play Sound
"Java Edition 1.0" redirects here. For general information about the official release of Minecraft, see Java Edition § Official release.
"Beta 1.9" redirects here. For beta versions of Bedrock Edition 1.9.0, see Bedrock Edition 1.9.0/Development versions.
For a guide about all content in this release and the other releases of the Adventure Update, see Java Edition guides/Adventure Update.
Minecraft 1.0.0 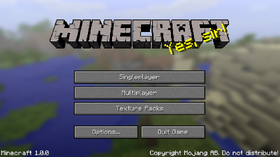 1.0.0 (known as 1.0 in the launcher), the second release of the Adventure Update, and the first full version of the game, was released on November 18, 2011,[1] during MINECON 2011, marking the game as officially released after two and a half years (916 days) of development. This version adds brewing, enchanting, the End, hardcore mode, breeding and more. It is the last version of Minecraft Markus Persson developed before he gave creative development to Jens Bergensten.

Initially named "Beta 1.9", Mojang Studios instead opted to release this update under the name "Minecraft 1.0.0", but this decision was made after development versions tagged as Beta 1.9 were already released, so all pre-releases for this version are labeled as "Beta 1.9".