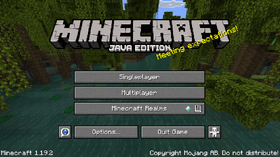 Minecraft: Java Edition (formerly just Minecraft) is the original version of Minecraft, developed by Mojang Studios for Windows, macOS, and Linux. Notch began development on May 10, 2009, publicly releasing Minecraft on May 17, 2009. The full release of the game (version 1.0.0) was on November 18, 2011, at MINECON 2011.

Logging in with Microsoft account is required to play the game. In addition to the latest version and latest snapshot, most past versions of Java Edition are also available through the launcher. The launcher allows for separate profiles that are useful for mods, development versions, and old versions.

Java Edition's code is more easily modified than the other editions, and so it has by far the most robust scenes for mods and custom servers. One example of this is the addition of the obfuscation map[12], which is intended to make modding easier. Realms for Java Edition is a separate service from Realms Plus for Bedrock Edition.

Notch got the idea for Minecraft after playing Infiniminer with other members of the TIGSource forums in 2009.[14] Other influences include Dwarf Fortress, Dungeon Keeper,[15] and Notch's own previous project, RubyDung.[16]

When he first started working on Minecraft, Notch had planned for it to just be a small project. For instance, when Notch uploaded the first YouTube video of Minecraft on May 13, 2009, he had not yet decided on a name, and simply referred to it as a "cave game".[17][18] The name Minecraft: Order of the Stone was announced the next day[19] (from a suggestion a TIGSource forums user gave in an IRC chat[20]), a reference to Order of the Stick[21], a webcomic and "one of the best things on the internet", and then shortly after, it was shortened to Minecraft as it was much simpler and to prevent people from confusing it with Order of the Stick. The name was later used for Minecraft: Story Mode. The game was finally released for an "early private single-player alpha" on May 16, 2009.[22] Today, the majority of all pre-classic versions are lost.

Minecraft 0.0.11a was publicly released the day after the private release on May 17, 2009,[23] and the game received mention on IndieGames.com the day after that.[24] This phase was later named Minecraft Classic.[25] In July, Minecraft was rewritten to use the Lightweight Java Gaming Library (LWJGL).[26] Until Minecraft Beta reintroduced it, Classic was the only version of Minecraft with the Creative game mode, which gives players an infinite amount of each block to build with without having to gather them as in Survival mode. A multiplayer test also occurred shortly before the Survival test.

Indev (short for in development) was released on December 23, 2009, after Notch received requests to let the community try out new features he was implementing in Survival Test. Indev version 0.31 was released to the public on minecraft.net/indev and available only to people who had purchased the game. When a new game was started, the player would spawn in a prefabricated wooden house.

Updates introduced a more complex and realistic lighting scheme than Classic, as well as a day-night cycle. Indev received more updates after this, adding a few fundamental features to Minecraft as it went. During its lifespan, some updates were devoted mostly to testing new things, like food, torches, or fire. The difficulty settings: Peaceful, Easy, Normal and Hard, were added to the game. Unique to Indev were level types, similar to biomes and dimensions - for example, Floating Islands and the Sky Dimension, and "Hell" (not Nether) . Like Survival Test, if the player were to die, all progress was lost.

Infdev (short for infinite development)[27] was released on February 27, 2010, and became the third phase of Minecraft's development. It featured the important addition of maps that can generate infinitely, which extended the gameplay possibilities even further as well as other upgrades including new crafting recipes, 3D clouds, a new terrain generator, a more realistic fluid system, and more complex caves. However, Infdev scrapped other features of Indev such as world themes. This, in turn, spelled the demise of features such as 'floating islands' and 'permaday'. These removals are understandable, as Infdev's main purpose was to develop infinite maps. However, some extra gameplay features and items were added, such as minecarts, dungeons with mob spawners, and the ability to respawn.

After being replaced by Alpha on June 30, 2010, Infdev remained available on the official Minecraft website until September 2010, when it was removed. Only one version, Infdev 20100618, is playable through the launcher, by enabling the "Historical versions" button in the Launcher options.

The Halloween Update on October 30, 2010, was a major update adding biomes, The Nether, new mobs, blocks and items, and other changes.

Beta was the sixth and last phase of Minecraft's development before its official release. Beta was released on December 20, 2010. Features that were added include a new logo and launcher, customizable world name and world seed, achievements and statistics, weather, Smooth Lighting, dyes, more plant types (two new types of trees and tall grass), wolves and squid, beds, and other blocks and items.

The Adventure Update was a major set of updates, focusing on exploring and combat and adding an ending to the game. Features added include a new terrain generator, new mobs, blocks, biomes, and items. Three generated structures were added: villages, strongholds, and mineshafts. Changes to general gameplay include an improved combat system including critical hits and experience, a reintroduced Creative, Hardcore, and a way to finish the game by traveling to The End and defeating the ender dragon.

Originally planned to be started in Beta 1.7, the first part of the Adventure Update was released as Beta 1.8 on September 14, 2011. Starting on September 9, 2011, developmental versions were "leaked" by Mojang Studios.[28] Beta 1.9 was never released, but 6 pre-releases using the 1.9 version number were made available for users to test and report bugs back to Mojang Studios. On October 18, a feature freeze went into effect and Mojang Studios shifted all Minecraft development focus to fixing bugs and preparing the game for release.[29] On November 13, a release candidate of 1.0 was released, along with an official update to 1.8.1 that added sounds from the developmental version.[30]

The full release of Minecraft, 1.0.0, was released during MINECON 2011 on November 18, 2011, by Notch at the keynote address ceremony at 9:54 pm UTC. Jeb confirmed the version number in a tweet while also stating that the game would be officially out of Beta.[31] The release includes many features from the Adventure Update that were not included in Beta 1.8. The most prominent feature is an ending to the game, which can be achieved by defeating the Ender Dragon boss in The End.

The full release of Minecraft is charged at full price (US$29.99, CA$39.99, €29.99, £24.99, AU$39.95, NZ$49.95, or SG$39.90) to new players, but Alpha and Beta players receive this copy through regular updating. After the release, Notch said in an interview that he was nervous about releasing a full game that would be rated and reviewed. Upon release, the game was well received and was given high ratings by many gaming websites and fan reviews.

On October 6, 2018, Mojang Studios open-sourced parts of the code for Java Edition, mainly the Brigadier command engine and the Data Fixer Upper. A complete rewrite of the game's rendering engine called Blaze3D is being considered for open-sourcing.[32]

The demo version of Java Edition is for players who haven't bought Minecraft yet and has some restrictions:

Controls for the Java Edition are designed for use with a keyboard and mouse, Touchscreen or touchpad.

According to the Minecraft: Java Edition store page:

Java Edition can not run on Windows RT, ChromeOS (unless "Linux development environment" is turned on), or on some non-PC devices that use Java, such as a car, a toaster, or Android.

Minecraft: Java Edition was first made available for sale in June 2009 and has since sold over 30 million copies. Minecraft has received high acclaim from critics and has since become one of the most influential and successful indie games ever released. The game's popularity has influenced the creation of a new genre of Minecraft clones.[33] The game has been praised for the creative freedom it grants its players in-game, and for how dynamic the overall gameplay is. Since its creation, Minecraft has become the best-selling video game in history, selling a combined total from all versions of over 238,000,000 copies.[34] PC Gamer listed Minecraft as the fourth-best game to play at work.[35]

A review of a version during the Alpha stage of the game, by Scott Munro of the Daily Record, called it "already something special" and urged readers to buy it.[36] Jim Rossignol of Rock, Paper, Shotgun also recommended the alpha of the game, calling it "a kind of generative 8-bit Lego S.T.A.L.K.E.R.: Shadow of Chernobyl."[37] On September 17, 2010, gaming webcomic Penny Arcade began a series of comics and news posts about the addictiveness of the game.[38] Video game talk show Good Game gave it a 7.5 and 9 out of 10, praising its creativity and customization, though they criticized its lack of a tutorial.[39]

On May 5, 2011, Minecraft was selected as one of the 80 games that would be displayed at the Smithsonian American Art Museum as part of "The Art of Video Games" exhibit that was opened on March 16, 2012.[40]