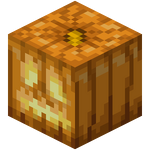 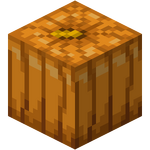 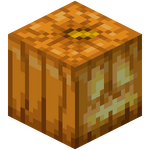 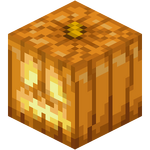 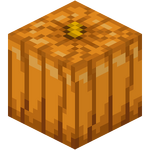 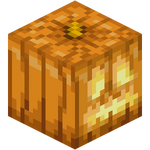 A jack o'lantern is a solid block that provides light.

Jack o'lanterns can be mined with any tool, or without a tool, but axes are the quickest.

A jack o'lantern also removes and drops itself as an item if a piston tries to push it (trying to pull it does nothing) or moves a block into its space.

Jack o'lanterns can spawn within taiga and snowy taiga villages in the piles of pumpkins that also generate there.

A Jack o'lantern emits more light than the torch used to craft it. The emit the maximum possible luminance of 15. They also provide light while submerged under water. Like most light sources, they melt snow and ice.

Jack o'lanterns are transparent in their rendering only; otherwise they share the attributes of all opaque solid blocks. For example, mobs can spawn on them, they can suffocate mobs, and blocks attached to another block (such as torches and rails) can be placed on top of them or on their sides.

Jack o'lanterns can be enchanted with curses using an anvil.‌[Java Edition only]

This section is missing information about Placement direction mechanics - see notice at Pumpkin#History for more info.
Please expand the section to include this information. Further details may exist on the talk page.

Issues relating to "Jack o'Lantern" are maintained on the bug tracker. Report issues there.