From Minecraft Wiki
Jump to: navigation, search
This article is about the ore. For the item, see Iron Ingot. For the mineral block, see Block of Iron. For the nugget, see Iron Nugget.
This article is missing information about the deepslate iron ore.
Please expand the article to include this information. Further details may exist on the talk page.
Iron Ore 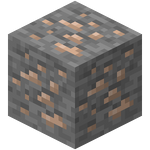 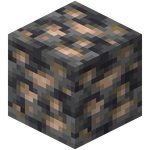 Iron ore is a mineral block found underground. It is smelted into iron ingots, which are used to make tools and armor.

Iron ore must be mined with a stone pickaxe or higher, or else it drops nothing. Unlike most ores, iron ore always drops itself, regardless of whether the player used Silk Touch.

‌In Java Edition 1.17‌[upcoming], iron ore will drop 1 Raw Iron. It is affected by Fortune enchantment, dropping 1-2, 1-3 or 1-4 raw iron respectively with Fortune I, II and III. When mined with Silk Touch, it will drop itself.

Iron ore can generate in the Overworld in the form of mineral veins. Iron ore attempts to generate 20 times per chunk in veins of size 0-13, from levels 0 to 63, in all biomes. On average they generate 112 ores per chunk.

‌In Bedrock Edition 1.17‌[upcoming], iron ore also attempts to generate 40 times per chunk in veins of size 0-10, from levels 128 to 256 within any type of mountains biome. Being more common as the y-level increases.

The primary usage of iron ore is to obtain iron ingots.

Iron ore can be placed under note blocks to produce "bass drum" sound.

Issues relating to "Iron Ore" are maintained on the bug tracker. Report issues there.