Edit
watch 28:07
Minecraft Interactive Experience
Do you like this video?
Play Sound
For other uses, see Golem.
Iron Golem 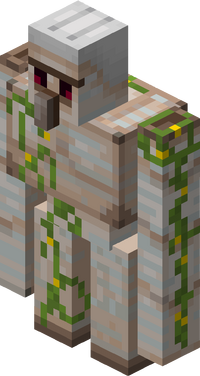 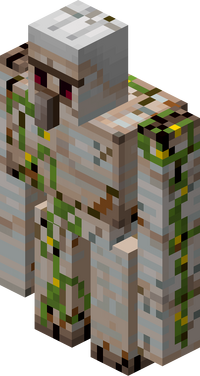 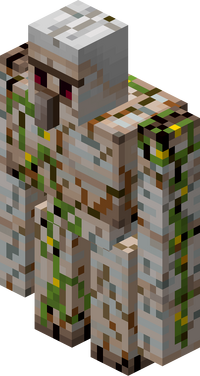 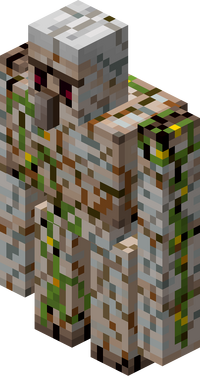 An iron golem is a large, strong neutral utility mob that defends players and villagers. It is one of the few mobs that can be built then spawned in the game.

In Java Edition, villagers can summon iron golems, either when they are gossiping or panicking and the following criteria are met:

To find a valid spawn point, up to 10 attempts are made to spawn a golem within a 16×13×16 box centered on the villager (villager block position +7/−8 blocks along x/z axes and ±6 blocks along y axis). A random y column is picked and then the topmost block in that column is selected that is air, water, or lava, and has a "solid-blocking" block underneath, or the block at y=+6 if none such is available in that column. The target location is then checked whether the block underneath has a solid top surface (which is not the same as "solid-blocking"). The target block and 2 blocks above must not be a full block, nor be redstone-powered, nor be rails, and the two blocks above must not be water. This means the iron golem can spawn inside 1-deep water or inside blocks like slabs, fences, and carpets (if other checks pass). Adjacent blocks are irrelevant, so golems can spawn partially inside adjacent solid blocks.[1] However, the spawning iron golem still must not collide with any existing entities.

In Bedrock Edition, an iron golem can spawn naturally when a village first generates in the world. Iron golems also spawn in villages having at least 20 beds and 10 villagers. The golem attempts to spawn in a 16×12×16 volume around the village center defined by a bed or a bell. For a horizontal coordinate chosen within the spawn volume, the golem spawns on the highest valid solid surface within the volume at that coordinate. For a village to spawn iron golems, 75% of the villagers in the village must have worked in the past day, 100% of the villagers must be linked to a bed, and a player must be within 64-128 blocks horizontal and 44-108 blocks vertical distance from the village center, depending on simulation distance.

The maximum distance the player can be from the village for iron golems to spawn can be calculated with this formula:

If the village's original iron golem is killed, a new one cannot spawn unless all of the conditions are met. Therefore, a small village does not regenerate an iron golem unless the village is expanded.

If the spawn conditions are met, then the chance of attempting a spawn is 1⁄700 per game tick, which averages to one spawn attempt every 35 seconds. Iron golems can spawn provided the 2×4×2 space above the spawn point (that is, horizontally centered on the northwest corner of the block it spawns on) contains only non-full blocks, and the block it spawns on is solid.

Iron golems are created by placing four iron blocks in a T shape (as shown in the image), and then placing a carved pumpkin, jack o'lantern or pumpkin‌[BE only] on top of the center upper block. The pumpkin may be placed by the player, a dispenser or an enderman, but it must be placed last. It needs at least one block of space around the bottom iron block to be able to spawn and cannot spawn in a confined area; even grass can prevent an iron golem from spawning. Alternatively, the blocks can be placed in any order with an uncarved pumpkin; the player can shear the pumpkin to spawn the golem. When successfully transformed, it is naturally passive toward all players under all circumstances. It can, however, attack the player’s tamed wolves, if punched accidentally, but it never directly attacks the player. The constructed golem attacks hostile mobs like a naturally spawned iron golem.

The block arrangement can be placed upright, lying down, or upside-down. The four empty spaces in the diagram (above and below each of the arms) must be air blocks. Any non-air block (including blocks such as snow layers, grass, and water) present in any of the empty spaces prevent the golem from spawning.

In Java Edition, the player can place a pumpkin on the four blocks of iron, then shear the pumpkin. The iron golem still spawns like normal.

Like other constructed mobs, iron golems always spawn facing south. Their large size may cause them to take suffocation damage from nearby solid blocks at the level of their head.

Dropping a pumpkin on the correct arrangement of iron blocks does not spawn a iron golem.

Iron golems can also be found surrounding pillager outposts, confined inside dark oak cages. When freed, they can help the player by attacking any nearby pillagers. Pillagers do not attack iron golems in cages, although the iron golem can attack any pillagers that are one block near the cage, because iron golems can attack through a one-block wall.

Iron golems drop when they die:

Killing an iron golem with a weapon enchanted by Looting has no effect on the number of iron ingots or poppies dropped. Trading prices are unaffected by the killing of iron golems; however, village popularity decreases by 10, affecting village iron golem behavior if the popularity ranges below -15‌[BE only].

Iron golems wander around a village in a patrol-like fashion, staying close to buildings and other structures. Like villagers, iron golems do not wander away from a village, regardless of how they were spawned, but sometimes stand at the border of the village.

An iron golem sometimes faces a villager as if they are conversing. Iron golems can spawn poppies in their hands and offer them to villagers, symbolizing the friendly relationship between villagers and iron golems. Baby villagers accept the poppy offered by the iron golem.‌[Bedrock Edition only][2] Attacking an iron golem that is not player-built while the iron golem is holding out a poppy causes it to take back the poppy and attack the player instead. If the iron golem sees a target while it is offering the poppy, it runs away toward the target like before and kills the target instead.

In Bedrock Edition, iron golems completely ignore villagers, pushing them aside while walking if a villager is in the iron golem's path, but they still offer poppies if possible.

If not within a village, iron golems slowly wander around attacking hostile mobs, usually making their way to a nearby village. If in that village, the iron golem doesn't leave.

Iron golems can walk up a full block height without jumping and walk over a 1 block wide hole without falling in. They avoid water, lava, fire, and cactus. Iron golems are immune to both drowning and fall damage. When in water, they sink, but can still move freely.

When an iron golem's health reduces to 75%, cracks appear on its surface. An iron golem can be healed when the player right-clicks the chest of the iron golem with an iron ingot. This action consumes the ingot.

When attacking, an iron golem moves quickly toward its target and swings its arms up violently to attack, flinging the target into the air, and dealing 7.5

× 10.75 damage in Normal difficulty. Iron golems have a large attack range, allowing them to attack through a solid 1 block thick wall, even without a line of sight to the target. When an iron golem attacks, it also deals a long knockback range. Iron golems cannot attack targets that are three blocks high above the same ground level as the golem.

It is possible for multiple golems to hit the same target simultaneously, flinging the victim to a height proportional to the number of golems that attacked. The mob/player flung can die from fall damage.

If the mob is flung out of sight, the iron golem attacks the next mob that attacks it. Sometimes, the iron golem might attack the nearest hostile mob if they are in groups.

When an iron golem kills any mob, the player can obtain items dropped by the mob, but no experience orbs. Iron golems that kill a raid mob in Bedrock Edition also causes the mob to drop its raid loot, even when the mob wasn't attacked by the player before it is killed.

A village iron golem retaliates when attacked by a player (even throwing an ender pearl at an iron golem provokes it). If a village has more than one naturally-spawned iron golems and a player attacks one in front of the other(s), all of iron golems in that type may become hostile to the player.

Throwing a positive splash potion or a positive lingering potion does not anger Iron golems.

Provocation by other mobs[]

Although they are guardians of villages, iron golems are not actually provoked when a mob attacks a nearby villager (in contrast to a player attacking a villager). With the exception of creepers, ghasts and goats (although they still can attack ghasts if close), they are provoked when attacked by any mobs, and by the presence of nearby monsters. Even if a witch accidentally throws a positive splash potion at an iron golem during a raid, this does not stop the iron golem from attacking the witch. Iron golems are ineffective against flying hostile mobs that don't venture into the iron golem's reach, such as phantoms.

The list below contains mobs (including players) that can have hostile interactions with iron golems. The iron golem also attacks neutral mobs or hostile mobs that attack the player such as piglins or zombified piglins.

A naturally-spawned iron golem knows where raiding illager locations are from behind solid walls and from underground and attempts to move toward them. An iron golem created by the player or summoned by a command cannot detect raiders through obstructions. Iron golems also looks down or looks up if the hostile mob is above or below the iron golem.

Zombies (and variants), zoglins, skeletons (and variants), silverfish‌[BE only], spiders, cave spiders, magma cubes‌[JE only], withers, illagers and witches‌[BE only] naturally attack iron golems on sight and may cause major damage, especially if the mobs attack in groups.

Iron golems have 100% knockback resistance from normal attacks. They can still be knocked back by the Knockback enchantment on swords and the Punch enchantment on bows.‌[Java Edition only]

Iron golems have different stages of being cracked to show their health. When their health is above 74

× 37, some cracks appear. When their health is between 25

Like villagers, iron golems in Bedrock Edition use a strategy of pathfinding that prioritizes walking on certain "low-cost" blocks.

Iron golems attempt to walk on a one-block-wide path, despite them being two blocks wide. An iron golem favors a wider path if it sees one.

Iron golems have entity data associated with them that contain various properties.

Issues relating to "Iron Golem" are maintained on the bug tracker. Report issues there.