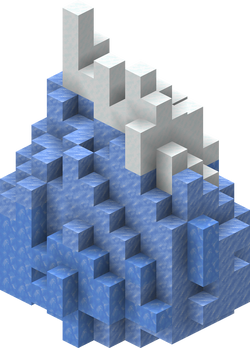 An iceberg is a large natural structure composed of different types of ice.

Icebergs generate in frozen oceans and their deep variants. They consist primarily of packed ice, occasionally with blue ice attached to them, and can be topped with snow. They are the only place where blue ice can be found naturally besides snowy plains villages. Icebergs generate in a wide variety of shapes and sizes, ranging from small islands to giant mountain-like ice structures. They can also generate with cave-like holes in them, which sometimes pass through to the other side of the iceberg. There is a chance of an iceberg to generate with blue ice instead of packed ice.