This article is a stub.
You can help by expanding it.
This page describes content that exists only in outdated versions of Minecraft.
This feature used to be in the game but has since been removed.
Ice Desert 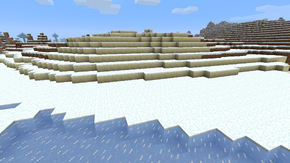 Ice deserts were cold biomes, which existed prior to the Adventure Update.

Ice deserts are similar in appearance to tundras, with fairly flat land and small hills. However, instead of dirt the surface is primarily made up of sand. Flowers, trees and passive mobs are non-existent in this biome. Ice deserts usually generate surrounded by tundra as well. The ice desert only existed as an unused biome; it was in the code but never implemented into the temperature/rainfall table and thus did not actually generate. It is the coldest biome to spawn as it generates if the temperature is below 10% with mod access.[check the code]