This feature is exclusive to Bedrock Edition and Education Edition.
Ice Bomb 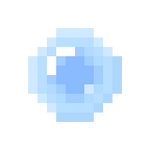 The ice bomb is an item that is used to freeze water into ice.

Ice bombs can be thrown by using them, similar to an egg. They are affected by gravity.

Ice bombs explode upon hitting most blocks, including non-solid blocks, but not air. They also explode upon hitting other entities, but they do not deal damage, and unlike eggs and snowballs, the impact is not considered an attack and does no damage or knockback. When exploding, any water (including flowing water, but not waterlogged blocks) in a 3×3×3 cube around the ice bomb freezes into ice. Ice bombs can be used to contain and displace mobs in ice under water.

Throwing an ice bomb while underwater encloses the player in ice.