Edit
watch 28:07
Minecraft Interactive Experience
Do you like this video?
Play Sound
This article is about the regular form of ice. For the variant that does not melt, see Packed Ice. For other uses, see Ice (disambiguation).
Ice 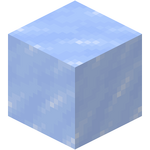 Ice is a translucent solid block.

Ice can be easily destroyed without tools, but the use of a pickaxe speeds up the process. It can be broken instantly with Efficiency III on a diamond pickaxe. However, the block drops only when using a tool enchanted with Silk Touch. If mined without Silk Touch, the block drops nothing, and instead is replaced with water if there is a block under the ice block.

Ice can be found naturally as part of the landscape in snowy biomes from rivers, and oceans. It can also be found in igloos, ice spikes, icebergs, snowy slopes, also on landscape of frozen peaks biomes. They also generate in ancient cities.

Water source blocks in a snowy biome eventually freeze into ice if exposed to the sky from directly above, the light level immediately adjacent to the water block on all sides is less than 13, and there is at least one horizontally adjacent non-water block. This can happen at any time of day, and in any weather condition. If the highest adjacent light level is 12, an ice block alternately melts and re-freezes when it receives a block tick.

Water also freezes into ice in cold biomes, as long as the altitude is high enough for snowfall.

When an ice bomb is thrown into water, it transforms the water in a 3×3×3 cube centered around the projectile into ice. This works for source water or flowing water upon hit.

Despite being created by a 3×3 recipe, packed ice is not a storage block, because it cannot be crafted back into ice. The same applies to the next tier of compression, blue ice.

Ice is slightly slippery, causing entities (excluding minecarts[1]) to slide, including items. This allows for increased speed of items in water currents, by placing ice blocks under the water current. Items already travel at high speeds in water currents because they float, so ice block water streams are less necessary for item transportation.

A player who sprints and jumps repeatedly on ice travels faster than on any other block type. The player can travel even faster if they sprint and spam jump in a 2-block-high corridor with ice on the floor, allowing the player to accelerate to extremely high speeds, although this will cost them a lot of hunger.

When a non-full block is placed on top of ice, the block has the same "slipperiness" as the ice below it. ‌[JE only] This feature is intentionally programmed into the game.[2]

Like other entities, boats travel extremely quickly on ice-blue ice, where it can reach an average speed of 33-45 m/s, much faster than the 8 m/s speed on water. More beneficially, unlike water, ice can be placed in the Nether, allowing players to construct boat highways made of ice/blue ice in the dimension, to make use of the 1:8 distance travel ratio, and travel on blue ice at an equivalent speed up to 263-360 m/s (3700mph) between locations in the Overworld.

Ice can be used to create water either by its melting or being broken. If there is another block directly underneath the ice block, the ice reverts to water when broken.

Ice also melts into water if the light level immediately next to it on any side is higher than 11, from light sources other than sunlight, but ice does not melt from sunlight. In Education and Bedrock editions, ice also melts when near a heat block, though heat blocks do not produce light.

Compared to water buckets, ice has the benefit of being able to stack in the inventory. Therefore, carrying ice instead of water buckets can be much more convenient, if the player wants to create a lot of water sources.

If ice melts or is broken in the Nether, no water is produced (it sublimates).

Issues relating to "Ice" are maintained on the bug tracker. Report issues there.