Edit
This article is about the Nether structure. For mushroom equivalent, see Huge mushroom.
Huge fungus 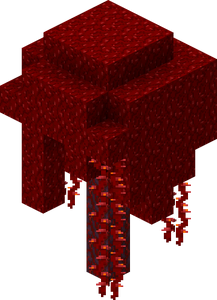 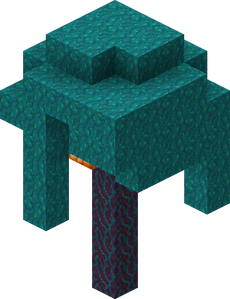 A huge fungus is a tree-like structure that generates in the Nether. There are two types of huge fungi: the huge crimson fungus and the huge warped fungus.

The trunks of huge fungi are made of either warped stems or crimson stems depending on the type. Huge fungus trunks can be either thick or thin: thick trunks grow up in a 3×3-plus shape, with stray stems sometimes in the corners, while thin trunks grow straight up as a 1×1 column. To determine the size of huge fungi, a random integer is chosen between 4 and 13 [inclusive]. There is then a 1⁄12 chance of that integer doubling. The resulting value is the height of the trunk. A layer of wart blocks and shroomlights is then spread around the trunk, being able to generate up to 3 blocks out from the trunk. There is a 3×3×2 hollow ring that surrounds the lowest block of a fungus where no blocks generate. Both variants have shroomlights generate inside them, both replacing the wart blocks and stems. Huge crimson fungi may also have weeping vines growing replacing the same, or from the underside of wart blocks. In this way huge crimson fungi may grow the weeping vines lower than the stems as well as initially generate replacing the stems, when naturally-generated uniquely along the local ceiling.

Both variants can grow instantly from their respective fungi if planted on its respective nylium block (e.g. warped fungus on warped nylium), and either a player uses bone meal on them, or a dispenser dispenses bone meal on them. There is a 40% chance of growth with each bone meal used. The bone meal is still consumed even if the huge fungus does not grow.

A fungus does not grow by itself through random ticks, unlike saplings.

Huge fungi grow even with blocks above them,[1] and do not replace any solid blocks when grown; however, they do not grow if blocked by the world height limit, or if situated outside of the world.

Huge fungi can grow up to 27 blocks tall. The maximum space they can take up is 9×27×9 blocks (partially hollow), and the average is 213 blocks of volume.

Nether wart blocks and shroomlight persist when the stem of the huge fungus is removed, unlike how leaves decay when logs of a tree are removed.