From Minecraft Wiki
Jump to: navigation, search
For a guide about all the additions and changes in this update, see Java Edition guides/Horse Update. 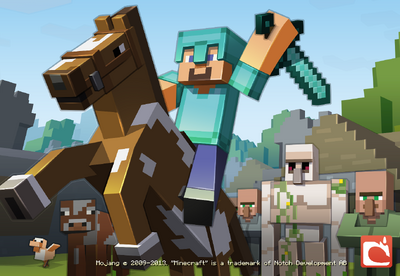 Promotional image (released alongside the update) [1]

The Horse Update is the name for Java Edition version 1.6.1 (or 1.6), a major update released on July 1, 2013.[2] It added many new features such as horses, leads, coal blocks, carpets, resource packs and a new launcher.

Development began the month after 1.5.1 was released. Eighteen development snapshots were released, from 13w16a to 13w26a. During the development period, 1.5.2 was released. Several iterations of the fourth launcher were released during this time period, from 0.1 to 1.2.2. Nearer the end of the snapshot cycle for the 1.6 update, Mojang focused primarily on fixing bugs, rather than adding new features.

The official name for the update – the Horse Update – was only announced a week prior to the 1.6 prerelease on the Minecraft update tumblr (which is viewed in the launcher).

Mojang released the 1.6 pre-release on June 25, 2013. This included an easter egg where mobs named "Dinnerbone" or "Grumm" were flipped upside down. The 1.6.1 pre-release was released on June 28, 2013, three days before the final release.