Edit
watch 28:07
Minecraft Interactive Experience
Do you like this video?
Play Sound
This article is about the block. For the crash utility, see Hopper (crash utility).
Hopper 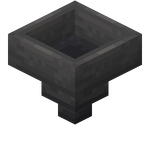 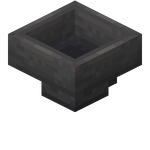 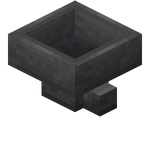 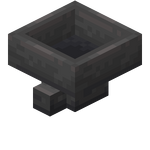 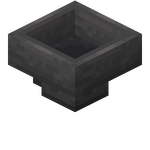 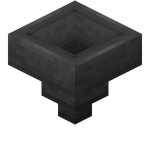 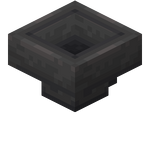 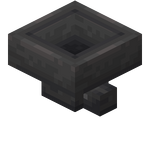 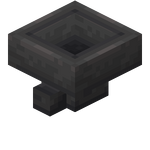 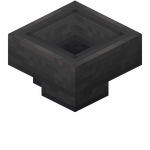 A hopper is a block that can be used to catch item entities, or to transfer items into and out of containers.

To obtain a hopper, mine it with a pickaxe. Using any other item to mine a hopper drops only its contents.

A hopper can also be obtained by destroying a minecart with hopper.‌[until JE 1.19]

A hopper can be crafted from 5 iron ingots and a chest.

A hopper can be used as a container, as a crafting ingredient, and as a redstone component.

A hopper has an "output" tube at its bottom that can face down or sideways and provides a visual indication of which block the hopper is set up to drop its items into, if that block has an inventory. To place a hopper, use the Place Block control while aiming at the surface to which its output should face (Hoppers do not orient themselves automatically). To place a hopper directly on the face of an already interactable block, the player can sneak while placing the hopper. Attempting to place a hopper aimed on the bottom face of a block instead faces downward. With some blocks, such as the furnace and brewing stand, the hopper has multiple uses. A hopper does not change direction after placement, and it is not attached to the container it faces; the container can be removed or replaced, and the hopper remains unchanged.

Hoppers cannot be moved by pistons.‌[Java Edition only] Despite not being a solid block, attached blocks such as rails, levers, tripwire and redstone dust can be placed on top of hoppers, but not on their sides.

A hopper can be used as a container and has 5 slots of inventory space.

By default, the GUI of a hopper is labeled "Item Hopper". A hopper's GUI label can be changed by naming the hopper in an anvil before placing it, or, in Java Edition, by using the data command (for example, to label a hopper at (0,64,0) "Steve's Hopper", use /data merge block 0 64 0 {CustomName:'"Steve's Hopper"'}).

In Java Edition, a hopper's GUI can be "locked" (or subsequently unlocked) by setting the hopper's Lock tag with the data command. If a hopper's Lock tag is not blank, the hopper cannot be accessed except by players holding an item with the same name as the Lock tag's text. For example, to lock a hopper at (0,64,0) so that only players holding an item named "Steve's Key" can access the hopper, use /data merge block 0 64 0 {Lock:"Steve's Key"}.

A hopper can be used to craft a minecart with hopper.

While a hopper is not powered by redstone signals, it operates with three functions:

A hopper first attempts to push any items inside it. Afterwards, it checks if the block above it is a type of container. If so, it attempts to pull from it. Otherwise, the hopper attempts to collect item entities. Notably, hoppers can push to and pull from other hoppers, forming hopper pipes or hopper chains, which allow transporting items across several blocks and are further discussed below.

When a hopper receives a redstone signal (and is considered to be "activated"), all three functions stop. To avoid confusion over the terms "activated" and "deactivated", powered hoppers are often described as being locked and unpowered hoppers described as being unlocked. Hoppers can be powered by soft powered blocks, meaning a redstone dust trail pointing into a block touching the hopper locks it just as effectively as a redstone block or any other power component touching the hopper. When the hopper is unlocked during a redstone tick, it does not push or pull/collect during the same tick, but has a delay of 1 redstone tick instead.

While a locked hopper does not push or pull/collect items, it may still receive items from dispensers, droppers and other hoppers, and may have its items pulled out by another hopper beneath it. Hence, the item flow in a horizontal hopper pipe may be stopped by locking just one of the hoppers, but stopping a vertical hopper pipe requires locking two adjacent hoppers at the same time, such that both the pushing of the top one and the pulling of the bottom one are stopped.

In Java Edition, if the hopper being read is part of a horizontal hopper pipe, the comparator can individually read each item passing through the chain, because items are pushed through the hoppers one by one at a speed that is manageable by the comparator. If there is an uninterrupted stream of items, the comparator will not switch off in between items. On the other hand, in a vertical hopper pipe, some of the hoppers may never produce a reading above 0, even with a continuous stream of items, because pushes and pulls both occur in the same game tick: The hoppers' items get pulled out a single game tick after they're pushed in and this isn't measurable by a comparator, because comparators need measurements lasting at least 1.5 redstone ticks to produce a reading.

A hopper collects items dropped on top of it if the space above the hopper not occupied by a storage block. In Java Edition, items are gathered from the entire 1 block space above the hopper, meaning that items sitting on partial blocks such as soul sand directly above a hopper can be collected. In Bedrock Edition, items are gathered from the lower 3⁄4 of the block space above the hopper, so items sitting on a lower slab or bed can be collected while items sitting on an enchanting table or horizontal grindstone cannot.[1] (Moreover, soul sand is a full block in Bedrock Edition.[2]) It is also possible for a hopper to collect items from inside a full, solid block, a situation that might come from items rising up through solid blocks or being summoned. Item entities are not collected when they are outside of the collection area however; for example, items on top of a stone block directly above a hopper are not collected. Collected items are placed in the leftmost empty slot of a hopper's inventory.

Hoppers usually check for dropped items every game tick and they can collect items even before they are picked up by a player[verify] or destroyed by lava. However, in Bedrock Edition hoppers have a "collection cooldown" time. After collecting an item (or stack of items), a hopper waits 4 redstone ticks (0.4 seconds, barring lag) before attempting to collect again.

Hoppers collect groups of items all at once rather than collecting them as single items one at a time. As a result, hoppers can collect item entities much faster than they can pull items from a container. Pulling from a moving minecart with chest or minecart with hopper is even slower, since the minecart is not always above the hopper.

In Java Edition the checks done by a hopper while pulling generally require less processing than the checks done by a hopper attempting collection. Therefore, a chain of hoppers topped with storage containers rather than air/solid blocks has better performance (measured as milliseconds of processing per tick) and lower potential for processing lag. [4] The performance improvement achieved is correlated with the the number of storage slots the container has. Placing composters (with no storage slots but still with custom output logic) on top of hoppers provide the greatest efficiency, while double chests actually degrade performance, even when sharing each double chest across two hoppers.[4] In Bedrock Edition a chain of hoppers with air or non-container blocks on top has better performance than a chain of hoppers topped by container blocks.[5] This may be because, even though hoppers with containers on top do not check for items, they do check for hopper-minecarts and chest-minecarts to pull from, and that involves scanning the chunk entity list.[6]

Chest A is full of items while the hopper and Chest B are empty.

Item pushes and pulls are processed in the same game tick, but pushes are processed before pulls. In the schematic, the empty hopper first pulls an item from chest A as it cannot push anything into chest B. After the cooldown, the hopper first pushes its item into chest B before pulling another item from chest A, both pushing and pulling in the same tick, and the process repeats. The hopper stops pulling when A is empty, and stops pushing when B becomes full.

Hoppers also have a "transfer cooldown" time. After pulling and/or pushing items, a hopper waits 4 redstone ticks (0.4 seconds, barring lag) before pulling or pushing again (a transfer rate of 2.5 items per second, barring lag). A hopper that has an item pushed into it from another hopper also starts a 4 tick cooldown period, regardless of whether it pushed or pulled items itself. Item entities can be collected at any time without affecting the transfer cooldown time. The transfer cooldown and the Bedrock Edition collection cooldown are independent of each other.

Some containers interact with hoppers in specific ways:

Furnace
Blast Furnace
Smoker
A working hopper pointing into top of a furnace deposits only into the ingredient slot. It can push any item, including items that can't be smelted by the furnace. A hopper pointing into the side of a furnace deposits into the fuel slot, and only items that are usable as fuel. A hopper below a furnace pulls everything from the output slot and empty buckets from the fuel slot left over from using lava buckets as fuel. When a hopper removes items from a furnace, the experience points are 'stored' in the furnace until a player removes at least one smelted item, or the furnace block is broken.

Hopper
A sequence of three or more hoppers, each pushing items into the next, is called a hopper pipe. Working horizontal hopper pipes simply push items into each other at the expected rate of 2.5 items per second, but vertical hopper pipes are more complicated, as the hoppers are trying both to pull and to push. When a vertical pipe pulls from a single container, it simply transfers items at 2.5 items per second because the transfer rate is limited by the first hopper pulling items from the container. If a stack of items is in a vertical pipe, the items can be transferred twice as fast, because the hopper with the item stack is pushing items down while the hopper below it is also pulling items down.

Lectern
Hoppers cannot remove or place books on lecterns. The redstone pulse emitted from a lectern when a page is turned can temporarily lock hoppers.

A hopper has a block entity associated with it that holds additional data about the block.

Issues relating to "Hopper" are maintained on the bug tracker. Report issues there.