From Minecraft Wiki
Jump to: navigation, search
For the feature in Minecraft Dungeons, see MCD:Heads-up display. 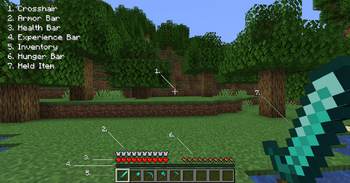 The HUD as seen in survival mode.

The heads-up display (HUD) appears on screen while the player is in the game. It is superimposed on their view of the game world.

All existing bars in the HUD. Clockwise starting from the bottom left: the experience bar, the health bar, the armor bar, the oxygen bar, and the hunger bar.

In Creative mode, the health, hunger, oxygen, experience and armor bars are hidden.

The textures are handled by icons.png.

The hotbar in Java Edition.

The hotbar in Bedrock Edition. The inventory button is visible when using touch input.

The hotbar is a selection bar that appears on the bottom of the screen. It is where the player stores and selects commonly used items. It consists of the bottom nine slots within the player's inventory. The selected item also displays on the right side of the screen, or an empty fist if the slot is empty. When the player switches an item in hand by mouse wheel or 1-9, its name is shown above the experience level for a short period of time. This name appears in italics.

Players can dual wield allowing a second item to be shown on the left (or right if the player's main hand is set to "left"), along with an additional hotbar slot on the same side. Both the slot and the item are shown only if it contains an item, which can either be added using the GUI or by pressing "swap items." In Java Edition, it shows the off-hand slot with the items equipped on the left of the hotbar. In Bedrock Edition, this is not the case although the item is still equipped in the off-hand slot.

In Bedrock Edition, the hotbar has an additional button for the inventory. However, this is present only on mobile devices such as Android, iOS, and Windows 10 (with touch screen). On the New Nintendo 3DS Edition, the hotbar is located on the Touch Screen and is slightly different.

The paper doll can be turned on and off by pressing F8 on PC.

Directional buttons on the Bedrock Edition

These buttons are present only in mobile versions(Android and iOS) and they serve to direct the player, players can sneaking and fly/jump, in the options and by going to "Touch", you can change the sneak and fly options.

Due to a bug with RenderDragon, the crosshair becomes fully white when using anti-aliasing for Windows 10, Xbox, and PlayStation 4.[1]

If the option for the attack indicator is set to "Crosshair" mode, weapon cooldown time is indicated by a sword icon near the crosshair that fills, representing the cooldown progress. This sword icon disappears once the weapon is fully cooled. In this mode, if a fully cooled weapon is being held, and a mob or player is in range, the sword icon and an additional plus-sign (+) indicator is shown below the crosshair, indicating that the weapon is in range to land a full-damage blow.‌[Java Edition only]

There is an option to hide the HUD. If the player is using keyboard controls, this can also be done with F1. In Bedrock Edition, the "Hide HUD" option toggles the hotbar, crosshair, and if using touch controls, buttons. The hand, paper doll, and coordinates are separate options.

Players can toggle the HUD, the vignette effect on fancy graphics, the pumpkin "view" and the block hitbox by pressing the F1 key. [more information needed]

The player can choose whether to use their right or left hand.‌[Java Edition only] This setting also moves the off-hand slot to the opposite side.

The HUD in Minecraft China.

This section describes content that is mainly available in China.

In Minecraft China, a "2 button" can be seen at the top of the screen. There is also a button to allow the player to take a screenshot or switch the camera and change voice settings.

At the right of the screen, a button can be seen that is used to lock walking, sprinting or sneaking. It can be useful in some situations.

The HUD (with original armor bar position) as it appeared before the Adventure Update.

The arrow count used to be to the right of the player's health, before Indev.