Edit
watch 28:07
Minecraft Interactive Experience
Do you like this video?
Play Sound
Head 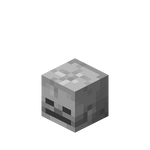 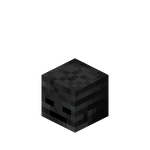 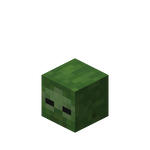 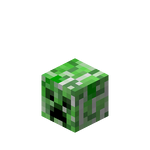 A head is a decorative block. There are six types of heads: player (only Steve's head), zombie, skeleton, wither skeleton, creeper, and dragon.

A mob head can be broken using anything and drops itself when broken.

If a head is pushed by a piston or comes in contact with water or lava, it breaks off as an item.

When destroyed by an explosion, the block always drops as an item.

Skeleton skulls can generate in ancient cities, which sometimes generate in the deep dark.

A wither skeleton has a 2.5% chance of dropping a wither skeleton skull when killed by a player or tamed wolf. The chance is increased by 1% per level of Looting, for a maximum of 5.5% with Looting III.

In Bedrock Edition, the chance is increased by 2% per level of Looting, for a maximum of 8.5% with Looting III.

Skeleton, wither skeleton, zombie, and creeper heads are also always dropped by the respective mob if it dies due to a charged creeper's explosion. However, if multiple valid mobs are killed in one explosion, only one head drops. The one that drops a head is chosen at random. In Bedrock Edition, the number of head drops from a charged creeper explosion is not limited. If an ender dragon or the player is killed by a charged creeper, it does not drop its head.

Mob heads can be oriented in 16 different directions on top of a block, and 4 directions on the sides of blocks, similar to signs. They can be placed on top of, or beside each other by shift clicking.

The dragon head opens and closes its mouth repeatedly like the ender dragon when placed and powered by redstone. The same animation occurs when worn by a (horizontally) moving player, zombie, skeleton, or armor stand (note: the animation does not play if the NoGravity tag is set to 1)

The player can wear heads, similarly to pumpkins or helmets. This overlays the second layer of the player's skin.

Wearing the corresponding mob head reduces the detection range for skeletons (but not wither skeletons), creepers, and zombies to 50% of the normal range. This is similar to (and stacks with) the reductions in detection range from sneaking and from the Invisibility status effect.

In Bedrock Edition, wearing any mob head or carved pumpkin makes the player invisible to other players on a locator map.

A dispenser can equip a mob head on a player, mob, or armor stand with an empty helmet slot, within the block the dispenser is facing.

Dispensers can also complete the construction of a wither.

Mob heads can receive the following enchantments, but only through an anvil.

Human heads have an extra usage for map makers, they can be given NBT data so that they appear with the skin of any Minecraft account. This means if a player knows that a specific account has a head that is desired to display, the NBT data can be edited to make it appear.

The command to give the player a head with the skin of another player is /give @s minecraft:player_head{SkullOwner:"<PlayerName>"}. Commonly, this kind of head is called a custom head.

Another command to give the player a head with another player's skin is /give @s minecraft:player_head{SkullOwner:{Id:"<PlayerUUID>",Properties:{textures:[{Value:"<SkinURL>"}]} } }. SkinURL is a string encoded in Base64 containing the URL of the player's skin.[1] A player head saves the skin of the player from the time it was created, meaning if the player changes their skin, the head still displays the original texture.[2] This kind of head is generally called a custom head.

Marc Watson created a number of accounts with specific skins so map makers could use common heads without the risk of someone changing their skins.[3] Nowadays, since heads do not update the skin if a player changes their skin, this is not something map-makers need to worry about, though these skins are still useful. These accounts have names in the format MHF_<Name>, for example MHF_PigZombie is the name of a Minecraft user with a Zombified Piglin head. MHF stands for "Marc's Head Format".[4] There are also a few blocks and "bonus" heads, for more variety. These player heads have not been updated in compliance with the Texture Update, and are outdated.

Because these are names of player accounts, these heads are obtained or placed using the SkullOwner tag, for instance: /give @s minecraft:player_head{SkullOwner:"MHF_<Name>"}.

The following names/heads have been made available:[5]

In Bedrock Edition, mob heads use the following data values: For the item and for the tile entity, data values determine the skull type:

Player heads use item NBT to save the owner.

A mob head has a block entity associated with it that holds additional data about the block.

When given using the /give command, it is announced as tile.skull.name.

Issues relating to "Head" are maintained on the bug tracker. Report issues there.