Edit
This article is about the normal guardian. For its larger gray variant, see Elder Guardian. For the mob in Minecraft Dungeons, see MCD:Guardian.
Guardian 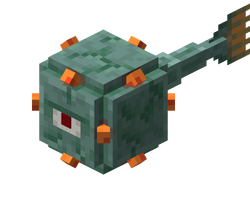 A guardian is a pufferfish-like hostile mob that spawn in and around ocean monuments.

Guardians spawn naturally in ocean monuments. They require water to spawn. Specifically, they can spawn only if the spawning block and the block below the spawning block are both water (regardless of stationary water or flowing water). In Java Edition guardians spawn less often in ocean open to the sky than they do in covered areas (such as inside or underneath the monument). Specifically, spawning fails 95% of the time if the spawning water block is below sea level (Y=63 by default), all blocks between the spawning water block and sea level are liquid or fully transparent, and the block at sea level has a view of the sky.

Guardians will spawn even if the monument has been destroyed by the player.

In Bedrock Edition, guardians are structure spawns, spawning on 25 pre-determined spawning spots. The x-coordinate of each spawning spot is X+2, X+13, X+29, X+45, or X+55, where X is the western edge of the monument. Similarly, the z-coordinate is Z+2, Z+13, Z+29, Z+45, or Z+55. They spawn on the northwest corner of the spawning spot block, meaning they can spawn inside of a portal and get instantly sent to the nether. If their sky access is obstructed by a solid block, the guardians spawn significantly faster. Like all structure spawns, guardians belong to the cave cap.

Guardians spawn in between Y=39 (floor of the ocean monument) to Y=61 (1 block higher than the topmost block of the monument).

They also drop one of the following:

When killed by the player Guardians have a 2.5% chance of dropping a random fish as an extra drop in addition to the normal fish drop. This chance is increased by 1% per Looting level, for a maximum of 5.5% with Looting III. This drop uses the same chances that fishing uses, resulting in a 60% chance for raw cod, a 25% chance for raw salmon, a 13% chance for pufferfish, and a 2% chance for tropical fish. A guardian on fire drops cooked fish.

Guardians also drop 10 when killed by a player, tamed wolf, or axolotl.

Guardians swim around in water, attacking any players, dolphins, squid, axolotl, or glow squid that come into range of its laser. They swim in abrupt charges, moving their tail rapidly when doing so. When swimming, their spikes retract. When not swimming, they sink slowly and their spikes extend and quiver.

Stationary guardians can be pushed by flowing water, but swimming guardians cannot. When pushed horizontally, they move significantly faster than other mobs pushed by water.

Guardians, as aquatic mobs, are affected by the Impaling enchantment.‌[JE only]

Guardians have two methods of attack: a laser and a defensive attack analogous to the Thorns enchantment. Unlike most other hostile mobs, a guardian does not follow a player who moves out of sight. Instead, it simply continues swimming until the player becomes visible again to start charging its laser.

Guardians attack players, axolotls, and squid. Otherwise, a guardian does not retaliate against mobs (such as iron golems) that attack it, other than damaging the attacking mob with its natural thorns defense.

The laser takes 2 seconds to charge, doing no damage in the meantime. It starts out purple and fades to yellow. Once charged, the laser flashes green and deals 6

magical damage on normal difficulty. The latter bypasses armor. Guardians swim around for 3 seconds before firing again. If the target approaches while the guardian is loading its laser, it stops firing and swims away until it is at a comfortable range, at which point it continues attacking. The laser cannot be dodged or blocked by a shield and has a maximum range of 15 blocks.

Once the target is out of range, or if the laser is obstructed by solid blocks (including transparent blocks like glass), the guardian's laser disengages.

Guardians deal damage each time it is hit with a melee attack while its spikes are extended, similar to the Thorns armor enchantment. If cornered, the guardian usually extends its spikes and fires at the player, even at point-blank range.

Guardians move toward a powered conduit and all light sources, flocking around them. However, a guardian that approaches within 8 blocks of a conduit is damaged by 4

Guardians have entity data associated with them that contains various properties.

Note: This video is outdated in Java Edition, as raw fish, cooked fish and clownfish are now called raw cod, cooked cod, and tropical fish as of 1.13.

Issues relating to "Guardian" are maintained on the bug tracker. Report issues there.