Edit
watch 28:07
Minecraft Interactive Experience
Do you like this video?
Play Sound
Granite 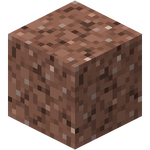 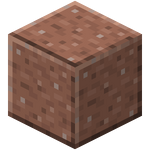 Granite is a block of igneous rock, found in large pockets in the ground.

Polished granite is the polished version of granite.

Granite can generate in the Overworld in the form of blobs.

In Bedrock Edition, Granite attempts to generate in two batches in all biomes in the Overworld. The first batch generate 2 times per chunk in blobs of size 0-862, from elevations 0 to 60. The second batch has 1⁄6 chance to generate blobs of size 0-862, from elevation 64 to 128. Granite can replace stone, andesite, and diorite. In Java Edition, granite only attempts to generate twice per chunk, however, the blobs are size 0-862. Granite can replace stone, diorite, andesite, tuff, and deepslate.

Granite can also generate as a part of coral reefs.‌[Bedrock Edition only]

Granite can be mined using any pickaxe. If mined without a pickaxe, it drops nothing.

Journeyman-level stone mason villagers have a 2⁄7 chance to sell 4 polished granite for one emerald as part of their trades.

Granite is currently used only for decoration. It has the same blast resistance as stone, meaning it can be used as a substitute for stone when building.

Journeyman-level stone mason villagers have 2⁄7 of a chance to buy 16 granite for an emerald.

Granite and polished granite can be placed under note blocks to produce "bass drum" sound.

Issues relating to "Granite" or "Polished Granite" are maintained on the bug tracker. Report issues there.