From Minecraft Wiki
Jump to: navigation, search
Not to be confused with Enchanted Golden Apple.
Golden Apple 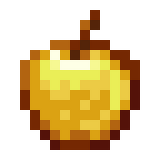 The golden apple is a special food item that bestows beneficial effects when consumed.

To eat a golden apple, press and hold use while it is selected in the hotbar. It restores 4 (

) points of hunger and 9.6 hunger saturation.

A golden apple and a potion of weakness can be used to convert a zombie villager into a regular villager.

Golden apples can be used to improve the chances of taming a horse by 10%, for breeding horses and for speeding up the growth of baby horses by 4 minutes.

Piglins are attracted to golden apples. They run toward any golden apples on the ground, and inspect it for 6 to 8 seconds before putting it in their inventory. However, piglins do not eat golden apples (or any food).

Issues relating to "Golden Apple" are maintained on the bug tracker. Report issues there.