Edit
This article is about the nugget. For the block that can drop nuggets, see Gilded Blackstone. For the ore, see Gold Ore. For the item, see Gold Ingot. For the mineral block, see Block of Gold.
Gold Nugget 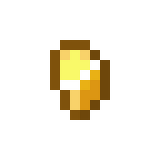 Gold nuggets are items used to make gold ingots and other various golden items. One gold nugget is effectively worth one-ninth of a gold ingot.

Zombified Piglins, when killed, may drop 0-1 gold nuggets. When killed using a weapon enchanted with Looting, they may drop an additional gold nugget per level of Looting used, up to a maximum of 4.

Gilded Blackstone mined using a pickaxe has a 10% chance to drop 2-5 gold nuggets. If the pickaxe is enchanted with Fortune I, the chance gold nuggets drop is increased 14.29%, Fortune II increases the drop chance to 25%, and Fortune III guarantees the drop.

Piglins instantly pick up any gold nuggets that are within 1 block of them. Unlike other gold-related items, they do not intentionally seek out gold nuggets to pick up and only pick them up if they walk near it. Unlike gold ingots, gold nuggets picked up are dropped upon the piglin's death.

When used in a furnace as a fuel, a gold nugget lasts 1 second.[1]

Issues relating to "Gold Nugget" are maintained on the bug tracker. Report issues there.