Edit
watch 28:07
Minecraft Interactive Experience
Do you like this video?
Play Sound
For the DLC mob in Minecraft Dungeons, see MCD:Goat.
Goat 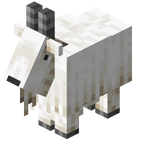 A goat is a neutral mob found in mountainous biomes. Goats can jump especially high and ram mobs. They are a source of goat horns and milk.

Groups of two to three goats spawn above opaque blocks on mountain biomes, such as snowy slopes, jagged peaks, and frozen peaks at the surface at a light level of 7 or higher. Goats spawn individually and more uncommonly after the world generation. 5% of all goats spawn as babies.

When a goat is spawned naturally or through breeding, it has a 2% chance of being a screaming goat‌[Java Edition only] or screamer goat.‌[Bedrock Edition only] They look identical to all other goats, but they make screaming sounds and ram more often.

Adult goats drop 1–3 when killed by a player or tamed wolf, while 1–7 is dropped upon successful breeding. Killing a baby goat yields no items or experience.

When left to wander, goats tend to ascend hills and mountains rather than keep to lowlands. Their behavior is marked by jumping high and by opportunistically ramming non-moving mobs.

A goat usually jumps when trying to cross an obstacle like a small hole in the ground or powder snow. It lowers its head, then it leaps up to 10 blocks vertically and up to 5 blocks laterally. Once a goat jumps this way, it cannot do it again for 30 to 60 seconds. A goat also never voluntarily jumps more than 5 blocks down, although a goat can be pushed off a higher cliff by another mob or a piston.

Standing on a honey block prevents a goat from jumping.

Every 30 to 300 seconds, a goat tries to ram a single unmoving target it can see within a range of 4–16 blocks. They can target players, armor stands, or any mob except for ghasts and other goats. A charging goat locks on to its target's position, lowers its head, stomps, and speeds toward the target. If the charge connects, it deals 1

damage (depending on difficulty) and 9 blocks of knockback to its target, possibly resulting in a damaging or even fatal fall.

As a goat lowers its head, its target has the chance to move out of the way. If a goat misses, it stops itself within a couple blocks, unless it hits a solid block first. If a goat rams a solid block that occurs naturally in its environment, it can drop one of its two goat horns.

Mobs do not retaliate when rammed by a goat.

Goats don't target players in Creative mode or any players in Peaceful difficulty. Unlike most neutral mobs, goats do not attack the player if the player attacks it, and it does not call for backup if harmed.

A goat can be milked by using a bucket on it. Milk is used for baking cakes and for clearing status effects.

Goats follow players that are within ten blocks who are holding wheat. If adult goats are fed wheat, they enter love mode and breed, granting one to seven experience orbs. The growth time of a baby goat can be accelerated by 10% each time it is fed wheat.

Unless baby goats are summoned through commands with the HasLeftHorn or HasRightHorn tag set to 1, they do not have horns.

Goats have entity data associated with them that contain various properties.

Issues relating to "Goat" are maintained on the bug tracker. Report issues there.

This page would benefit from the addition of more images.
Please remove this notice once you've added suitable images to the article.
The specific instructions are: Pixel art goat from the biome vote video